I heard the bear behind me and instinctively turned on the Hero3 mounted on my tree stand. It had become second nature and the beeps let me know we were live. The bear cleared the timber and sauntered right under my stand. He was one with his entourage of drool and flies and attitude. That moment and the look that was on my face when I saw what I saw as I reached for my bow, will forever be in my video GoPro library.

And it was a dang good thing the GoPro had my back, because as I turned to tell my cameraman I was going to shoot the bear – I FOUND HE WAS ASLEEP - just five unreachable feet away in an adjacent tree!

According to the GoPro, it took 1-minute and 6-seconds for my cameraman to wake up and capture the moment. It only took one click of the button for GoPro to capture that unforgettable look on my face.

For 14 years, GoPro has been a compact, waterproof, nearly indestructible tool for recording stunning video. With a once-in-a-lifetime trophy bear at my feet, the camera recorded my emphatic, but calculated attempts to wake my cameraman from his slumber. But, as most of you know that 1:06 only has the muffled audio because of the waterproof housing that we have grown accustomed to when using GoPro. Granted some choice words would have made it nearly unusable anyway, as I attempted to wake my cameraman, but you get the idea. Now to our present day and moment.

After 14 years GoPro has solved the equation of lost audio. Wait, did I say that right? GoPro has solved what? Yes, the game has changed! Not only with a single click of a button from a camera that can be mounted on any surface can every outdoorsman capture stunning video, but for the first time in the history of this technology, GoPro captures audio and its waterproof!

I was excited to breakdown the latest from GoPro and run a couple of tests under perfect conditions to help us all understand how this technology can help us relive the unforgettable. I opened the boxes of the GoPro Hero4 Black, the GoPro Hero5 Black and lastly the purest of all GoPro’s, the nearly invisible Hero5 Session. Below is a list of verified features that I feel distinguishes the three cameras. There are, to say the least, a long list of viable and amazing features that are not in this breakdown. These features show some of the main differences between the two, as well as communicating the battery life data we uncovered from the Sportsman’s News field test. 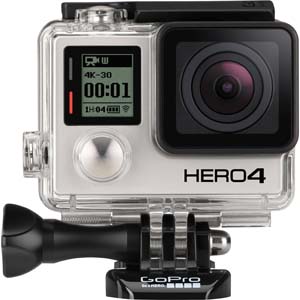 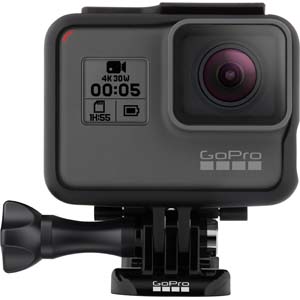 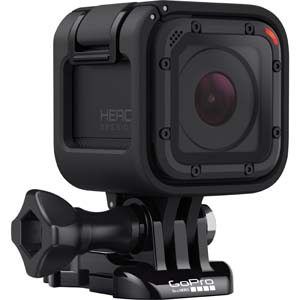 
Okay, so you want to know the bottom line when it comes to the three in question? Hands down in every way, even in price point, the fully waterproof voice activated HERO5 Black is the way to go. Being able to see what you are filming while you are filming for playback and field data changes the game.

Last year I was on Prince of Whales Island and I wanted to get some underwater footage of the salmon, regarding data whether there were early silvers mixed in with the pinks and chums. The homemade harness took me a bit of time to balance, but I was soon able to lower the HERO4 Black into the water with a spin casting rod. In remote situations, I don’t carry my cell phone where the activity of the day can lead to my absent-minded mind leaving the phone on the bank. I also know that the WIFI doesn’t work as soon as the GoPro is submerged in the water (something I learned while trying to get underwater walleye footage a few years earlier) despite all the GoPro data that suggests it should work.

All of that being said, when I reeled the GoPro back up out of the water because of the remote nature of the situation, there was no way for me to see what I had recorded until I got back to the lodge that evening. Investigation revealed the stream was packed full of pinks and chums and one lonely silver graced the scene, information that would have been highly valuable in the field while we were there.

The HERO5 Black is a game changer and in the future I will have the option for field checking the footage with the LCD playback mode. The Session is small enough and it will make you laugh, but I look forward to using it where weight and space is an issue and I don’t need to see the data I’m filming in the field.

I also field tested the GoPro app with the Session, the Hero5 Black and the Hero4 Black. Pairing is user friendly and the navigation is simple. Just go to your ‘Playstore for Android’ or ‘Appstore for Apple’ and download the free app. I would be less inclined to use the Session camera without the app and I expect in a controlled setting, this will be my go-to GoPro in discrete situations, as it is quite literally invisible. The camera weighs 2.6oz, is fully waterproof and records high quality audio.

In short, GoPro has arrived at two cameras that are worth every penny. Feel free to buy any of the Hero4 series, because they work. But in my opinion, treat yourself to the Hero5 Black or the Hero5 Session. Next, I’m expecting them to figure out how to, upon hitting record, simultaneously capture epic footage and also wake up my dang cameraman!

Depending on your power needs and where you will use these, one of them will be a great companion on your next outdoor trek or for power during an emergency....