Getting a precision load doesn’t have to mean an expensive and heavy powder scale. With the Chargemaster Lite from RCBS, getting a precise load of powder is as simple as setting the powder tray on the scale.

The Chargemaster Lite incorporates many of the features of its big brother, the RCBS Chargemaster, in a smaller package.

It has a powder dump dispenser on the side for quickly emptying the powder hopper for changing propellant. It also has a wind guard to prevent air currents from messing with your precision load.

The large powder hopper holds almost an entire pound of powder, so you don’t have to keep filling it up as you get into your loading rhythm.

The digital touch screen ensures you can easily input your load information, as well as read the weights and cues, and lights up with an easy to read green background.

It takes up much less space on your bench than the full-sized version and performs all the same functions. A bubble level mounted in the body lets you quickly ensure that the dispenser is perfectly level for even more precision.

The scale itself will measure in grams or grains, and the unit of measure is easily switched. The interface in general is very intuitive and easy to use without unneeded frills that can make it confusing. 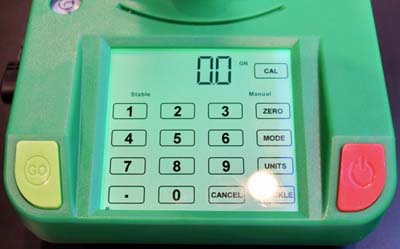 The scale can be used by itself or with the powder dispenser. The dispenser will deliver just the right amount of powder and stop when the scale reaches the pre-set weight, or you can dispense manually by trickling powder until you reach your desired weight and release the dispense button. The automatic mode will begin dispensing the last dispensed quantity the moment the pan is placed back on the scale.

The Chargemaster Lite works equally well with stick, ball, and disc type smokeless powders. Ample pour spouts on the tray allow you to dump powder directly into the case or through the mouth of a case loading funnel with either hand, further speeding up your loading without sacrificing your precision.

The Chargemaster Lite will dispense from 2-300 grains of powder at a time and is accurate to within +/-0.1 grain. It is equipped with an autoswitch for use with either 120 volts AC or 240 volts DC, and comes with charging adapters for the US and most of Europe and Australia.

The tough plastic case resists dirt, oil, and other materials, and is rugged enough to take a moderate dive onto the desk without leaving much more than a scratch, which is not the suggested method of testing this delicate precision machine, but it did happen to be the way we inadvertently tested ours. The good news is that everything still works and calibrates to match the Big Green Machine, the full RCBS Chargemaster.