Anyone who owns the Ruger Mark I, II or III knows that it is an amazingly accurate precision machine. My Mark III is my favorite gun to shoot and hundreds of thousands of rounds of inexpensive .22 LR ammo have been launched down its barrel. It is also my least favorite gun to clean. The complex disassembly process makes it so that even shooters with years of experience have been frustrated taking it apart and putting it back together.

Ruger has heard these complaints and redesigned the gun for 2017 as the Mark IV, with simple, single-button disassembly. A push of the button under the slide allows the entire upper receiver and barrel to be tilted upward and removed from the frame.

Not only did they simplify the process, Ruger has made it as simple as it can possibly get.

In addition to the easier cleaning, they have made some modifications to the contouring around the ejector port and slide. Two machined depressions in front of the slide, make it easier to grip, especially with gloves. The machining around the chamber removes sharp edges that made it difficult to get a cleaning patch into, on the previous models. I have a cleaning brush with a plastic handle that has several deep cuts from cleaning the chamber on my Mark III. This bevel also provides more reliable ejection of spent cases.

Our test model is the Hunter with a fluted bull barrel for improved accuracy and less weight. It features fully adjustable rear sights with simple screw heads for windage and elevation adjustments. The front sight comes with three different colored fiber optic inserts and a holder and removal tool to keep them organized and quickly push out the insert from the sight. The Mark IV is also tapped for a mounting rail to allow the use of scopes and optics.

Our model also features the Target Laminate wood grips. For shooters with beefier mitts, this contoured wood grip is the bomb diggity. The shape of the grip perfectly aligns my fingers for easy access to the controls while directing the barrel alignment in a straight line with my arm.  It also keeps my fingers from errantly wandering toward the oversized magazine release. 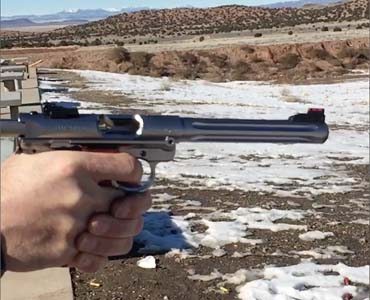 The redesign also includes a magazine ejection assist at the bottom of the magazine well, to help the lightweight magazines more easily drop free, by pushing them out when you hit the release, making for faster magazine changes. This feature became a little bit of a problem with one of the two included magazines; a faulty magazine that wanted to disengage during firing and would be flung out of the bottom of the gun while shooting. A quick call to the awesome Ruger Customer Service people and a new mag is winging its way to the Sportsman’s News office. Additionally, the Mark IV is compatible with standard Mark III magazines.

Every interaction I have ever had with Ruger’s Customer Service team has shown me that they definitely know how to take good care of their customers and stand behind their products.

The only downside I could find on this pistol is the ambidextrous safety. It just feels a bit sluggish and stiff to operate and could definitely use a ball detent to let you know that it has been flipped with a positive click.

Internal modifications to the hammer, bolt, firing pin and sear have improved reliability and other than the issues with the defective magazine, we had zero malfunctions running several hundred rounds of various rimfire ammo through the gun. 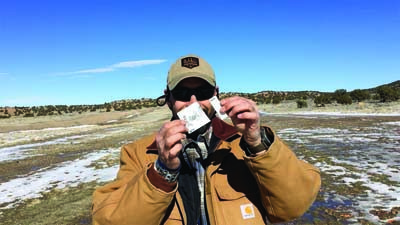 The accuracy however, is unparalleled. While the trend in the rimfire world has been to scale down full-sized versions of a company’s larger caliber pistols and replace most of the parts with cheap plastic and weak springs that leave you feeling like you are shooting a cheap airsoft gun, the Ruger Mark IV feels like a precision target pistol. It is solid and substantial. And, it is a tack-driving son of a gun. I was easily able to split playing cards on edge from 15 feet away with this pistol. The weight, balance, precision engineering and manufacturing, sights, grip and smooth trigger all worked together in finely tuned synchronicity to produce amazingly tight groups and pinpoint control.

The trigger is clean and crisp with a very positive reset and imperceptible creep and breaks at right around 4.5 pounds; just enough to be safe, but light enough to have minimal effect on accuracy.

The stainless-steel body, with traditional deep wood and fine lines, make it functional for all kinds of environments, as well as attractive.

All told, the Ruger Mark IV is a fitting extension of the familiar rimfire series of pistols with a familiar feel, look, and manual of operation, minus the difficult field stripping procedure. The fine details are evidence of the continuation of the gun making craft at Ruger and would be a great addition for those looking to add to their training, plinking, and small game hunting collection. It is a fine shooting American made pistol, as well as an attractive example of the gun-maker’s art.