As part of the U.S. Army’s Modular Handgun System competition to replace the Beretta 92/M9 that served the U.S. military for more than 25 years, the Army provided specific features and specifications they wanted to see. One of those was the ability to quickly swap the fire controls with various frames and slides to increase the versatility of the weapon for different environments and operations.

The winner of that competition was Sig Sauer with their M17, a modified P320. About a year later, the US Navy also adopted the M17. Now Sig Sauer is offering a civilian version of the M17. Designated as the P320-M17, the civilian pistol is very closely-based on the military M17.

The M17 retained the reliable and low-maintenance striker-fire mechanism of the P320, the beefy striker and firing assembly, along with easy disassembly of P320 in the new version. It can also be disassembled without pulling the trigger, which is a big plus in a duty gun.

The P320-M17 comes in a standard configuration, but also has grip modules available in two smaller sizes for carry or compact concealment. The standard slide, barrel and fire control can quickly be swapped between the various grips. The gun comes standard with two 17-round magazines and the grip modules will work with those, but 10-round magazines are also available that eliminate the space of the longer magazines sticking out of the grip. Extended 21-rounders can also be purchased for it as well. 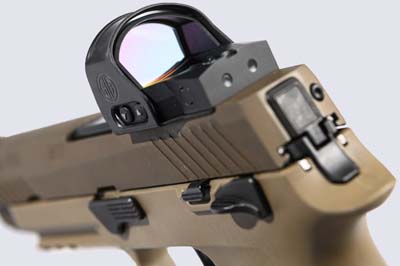 Not only does the modular design of the M17 allow it to easily be reconfigured for a variety of uses, the new design also provides some features that were not available on the standard Sig P320. The most noticeable is the optics cut on the top of the slide. The slide is already milled to accept red dot optics. Rather than a standard RMR cut, the MHS specified a cut that fits the Leupold DeltaPoint Pro footprint and screw hole alignment. This larger plate will allow adapter plates to be created for a wider variety of red dots. Not to be left behind, the Sig Electro-Optics division has adapted their ROMEO1 to fit on top and designated it as the ROMEO1 Pro. Either the Leupold or the Sig ROMEO1 Pro will fit on the gun. At this time, it appears there is no way to mount other optics, but there is little doubt that as this gun begins to make its way into use in theater, other optics companies will make red dots to fit on top.

Another feature that the MHS required is an external manual safety and Sig accommodated this with a true ambidextrous safety that is fully functional and clearly indexes the shooter’s thumb. The slide lock is also accessible from both sides of the gun and the magazine release can be reversed. Couple this with a larger chamber cut that launches fired cases up and back and the gun is very use friendly for the southpaw. The civilian version is also available without the manual safety.

The stock P320-M17 comes with a 4.7-inch barrel and the stainless-steel slide is 8 inches overall and just over an inch wide. The stainless slide is coated with what Sig is calling a PVD finish. It is a very rugged coating that protects the finish from moisture, rust and corrosion, but also helps protect against scratching. It and the grip are in an attractive coyote tan color. The internal firing assembly is also constructed of easy-to-maintain stainless-steel.

The polymer grip module is beautifully contoured for a natural point of aim that feels great in the hand. The subtle undercut on the trigger guard is shallow for a higher grip on the pistol for more control and better ergonomics. The texturing on the grip is aggressive without being painful for a positive grip.

Because this gun will be used in combat theaters by troops at the pointy end, it is designed to be supremely reliable and work when dirty, dusty, wet, and sandy. It works when it is unoiled and also when it is filthy with carbon fouling. In the three months I have been shooting this gun, I have put several thousand rounds through it and haven’t cleaned it once. 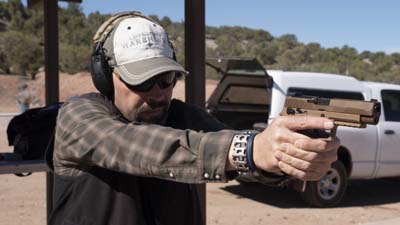 On the range, the P320-M17 is a joy to shoot. The long sight radius coupled with a medium bore axis, minimizes muzzle flip and also provides some mass to absorb recoil. The natural point-of-aim, coupled with a SIGLITE front tritium sight and a night site rear plate, makes getting back on target rapidly a breeze. The rear sights are steel and are attached to the removable red dot cut, so if you add a red dot, you won’t be able to co-witness your rear sights. The included rear night sights do have a flat front face for single handed cocking, which is a must in a combat pistol.

The trigger on my test gun was breaking at an average of 7.34 pounds and had very little creep and imperceptible overtravel. The finish is a little mushy without a clear and distinct wall. However, when firing the pistol, it feels lighter, no doubt a result of the ergonomics.

After some pretty extensive testing and evaluation, the P320-M17 took a lot of abuse and in case anyone was still wondering, 10 drops on its butt from 6 feet resulted in not a single dent on the primed empty case in the chamber.

I am very impressed with the look, feel and most importantly, the performance of this pistol and I will be adding it to my arsen… er, collection. But don’t just take my word for it. Put it in your own hands at your local Sportsman’s Warehouse gun counter and feel for yourself the great ergonomics of this fine weapon.