Known for their quality, rugged, yet inexpensive sporting shotguns, Stoeger firearms has released their first striker fired polymer pistol. Chambered in 9mm, the STR-9 provides excellent ergonomics with the proven reliability of the striker-fired design at an excellent value.

Featuring the same 22 degrees off-square grip angle of other striker fired pistols on the market, the STR incorporates an aggressive texturing into the grip surfaces for positive control with gloves or when wet. Wider finger grooves on the grip face suggest finger placement rather than locking your fingers into position, which is a great approach for those with larger hands. A wider trigger guard undercut doesn’t rub your finger causing blisters or calluses. 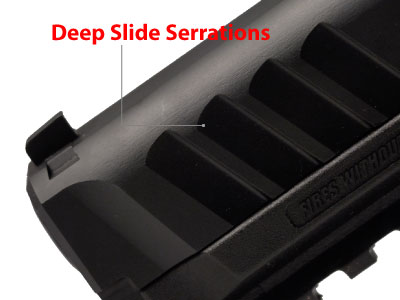 The aggressive texture transfers to the slide, with deep slide cuts that angle forward to provide even more engagement when pushing the slide against the force of the recoil spring. A 4-inch barrel provides the perfect balance of optimal velocities and concealability.

The manual of arms for the STR is familiar to anyone who has operated a striker-fired pistol and is easy to learn for those unfamiliar with the popular style. The internals are also familiar, but also include a solid steel full length guide rod capturing a stout flat recoil spring.

Other features like solid three-dot steel driftable sights, with a flat face on the rear sight for one-handed cocking, make aiming easier, and you won’t fear shearing them off.

A reversible oversized magazine release is optimally placed for easy activation. A loaded chamber indicator lets you easily identify whether the gun is loaded. Takedown is easy and familiar but does require the trigger to be pulled to disassemble. An accessory rail on the dust cover is channeled for a larger variety of accessories, lights, and lasers.

The pistol is rated for Plus-P ammunition and is compact enough for concealed carry. Stoeger also has holsters available for this new handgun. Multiple internal safeties ensure that the gun can be carried fully loaded with a round in the chamber without fear of a negligent or accidental discharge.

The trigger is a standard double blade curved trigger that was firm and crisp. Pretty standard for self-defense pistols. The trigger guard is roomy enough to accommodate even bulky gloves. 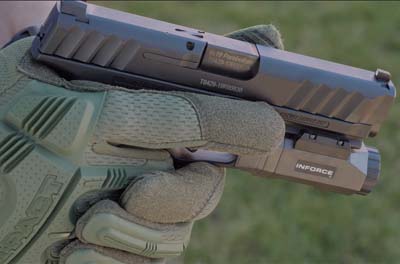 The base model comes with a single magazine, but a version is also available with three magazines and a set of three interchangeable backstraps to adjust the grip size. A third configuration provides three magazines, the backstraps, and steel tritium night sights.

The gun shoots exceptionally well and performs flawlessly with a wide range of both factory target FMJ ammunition as well as specialty hollow point self-defense loads. It has a natural point of aim, is comfortable in the hands, dissipates recoil nicely, and just plain feels great to shoot. The sights are easy to see, even in low light, and the accessory rail will accept a wide variety of lights and lasers, and even performs well with training aids that attach to the dust cover.

Designed and marketed as a value option for self-defense, the Stoeger STR 9 doesn’t scrimp on quality or functionality. It is well-designed, well-made, and provides far more value and performance than its low price tag might imply.

Accuracy from a gun is a factor of many things. The inherent accuracy is a function of the fit and finish, proper barrel crowning and rifling, grip angle, bore axis, and how the gun is assembled. On top of that, the ergonomics of the pistol can help guide the shooter to better precision. Add in the skill of the shooter and the consistency of the ammunition, and you get a benchmark of performance. This gun is well fit, machined cleanly, and has all of the elements needed to make the holes appear where you point the sights. In that regard it provides excellent shootability and accuracy.

As a target pistol, for home defense, daily carry, and even competition, the Stoeger STR 9 is an excellent gun for a new shooter and seasoned veteran alike. It does everything you ask of it and is a reliable choice for a handgun.

Check one out at your local Sportsman's Warehouse!