The Browning name is steeped in tradition and is a name you can count on for dependable firearms. They provide first class craftsmanship and accuracy which is second to none. This has been the case for well over a century and the addition of the X-Bolt a few years back continued the tradition. In 2016, Browning offered the X-Bolt McMillan Long Range Hunter as a limited offering. This rifle was touted as a long range shooters dream.

The Sportsman’s News team ordered one immediately and it took nearly eight months to take delivery of this precision shooting rifle. We topped the rifle with a new Leupold VX6-HD riflescope in 4-24X52 to get the most out of this rifles long range ability. We attached the rifle with a 20MOA rail from Talley as well as medium height Talley tactical rings to accommodate the 34MM tube on the scope. 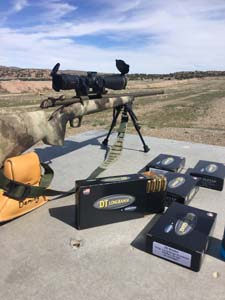 This rifle is available in numerous calibers, starting with the 6 MM Creedmore all the way up to the .300 WinMag., but we chose my favorite caliber. the .26 Nosler for this test rifle. We always shoot premium ammunition from Doubletap for our testing and in the past, all of the .26 Nosler rifles in X-Bolt have shot the 127 grain Barnes LRX bullet extremely well. However, this specific rifle performed the best with 140 grain Nosler Accubond bullets. We tested every load Doubletap Ammunition offers in this caliber to make sure we were getting the most out of the rifle.

The McMillan stock on this rifle is built for long range shooting. The fat pistol grip keeps you from gripping too tight and torquing the rifle and the flat forearm rests nicely on the shooting bags for a stable platform. The front of the stock has a sling stud to accommodate those of you that like shooting with a bipod. Holes designed for quick disconnect slings are also part of this lightweight chassis.

The free-floating barrel and the adjustable trigger provide you with everything you would get with a custom rifle, at a fraction of the cost. The long range accuracy on this rifle is more than one would expect from any custom rifle, as well. At 1000 yards, I was able to shoot consistent 5” groups in mild winds and gave me the confidence to take this rifle with me on a spring brown bear hunt in southeast Alaska. That’s right, a .26 Nosler for brown bears. A rifle that shoots with this precision and with minimal recoil is one that I can have confidence in putting my shot exactly where I want to and make a killing shot inside of 500 yards. Of course, my intent was to get inside of 300 yards, if possible and shoot him right behind the ear!