When it comes to a reputation for quality firearms, Colt’s Firearms Company has a long legacy of making quality guns for generations. To continue that legacy for quality, Colt has collaborated with Doubletap Ammunition to create match and defensive ammunition for the most popular pistol and rifles that Colt makes.

“This collaboration of design is the best representation of the Colt brand. It has less recoil so it is quicker back on target, quicker for follow up shots, less noise, less muzzle blast; all while having proper penetration and good expansion,” said Doubletap President Mike McNett.

Doubletap is known across the firearms industry for making the highest quality defensive, hunting, and match ammo that performs when the shot counts. Working with Colt to design an ammo that performs in their firearms, whether older or newer, and gives optimal performance, was right in Doubletap’s ballpark. 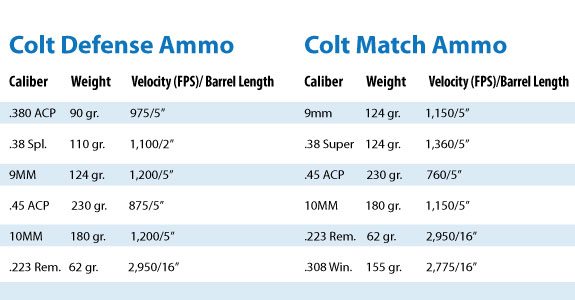 The real benefit of the match ammo is that it performs very much like the defense ammo, providing similar recoil so that those practicing with their defensive gun have a lower cost, range-safe alternative. Additionally, the match loads are rated with power factors, listed on each box, that meet IDPA, ISPC, and USPSA competition requirements.

In addition to working up the loads, Doubletap is making the components in their Cedar City, UT factory, so you have a quality American made, hand inspected product that you can trust to perform, whether in competition, or to defend your life.