Reaching out to 1,300-yards with minimal wind drift before going transonic, the 90-grain Sierra MatchKing HPBT from Federal Premium in .224 Valkyrie is providing optimum range, amazing accuracy and awesome terminal ballistics out of a modern sporting rifle with minimal recoil.

To get the same terminal ballistics from a modern sporting rifle, you need to go with a much heavier bullet, such as the 6.5mm Creedmoor. This larger bullet absorbs more of the wind, which influences its trajectory more. It also achieves greater recoil, because it is pushing a heavier bullet. Both of these factors combined, hit as hard but move the rifle more when the shot is fired. This additional recoil makes it impossible for a lone shooter to spot his own hits.

With the .224 Valkyrie round, developed by Federal Premium in a rifle developed by Savage, this pairing can achieve the desired outcome. That is the benefit afforded to Vista Outdoors in that they own a rifle company and an ammunition maker, so they can wed components to achieve their perfect result. This synergy carries into research, design, manufacturing and testing to provide the ultimate in arrangement of elements for the ultimate in performance. 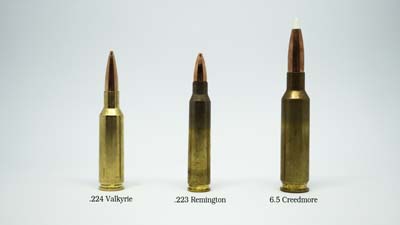 The Cartridge
The .224 Valkyrie pairs high quality Federal brass to a Sierra MatchKing HPBT 90-grain bullet. This bullet flies flatter than many others and is long enough to provide an impressive ballistic coefficient of .563, coming out of the muzzle of a 24-inch barrel at 2,700 feet per second. This speedy little whizzer stays flat and has minimal influence from the wind, because of its relatively small size. It also stays above 1,087 feet per second (the speed of sound at sea level) for over 1,300 feet, so it carries a good amount of energy with it. This equates to less drop over distance, which is what you are looking for in a match round. It is also what you want in a hunting round, but you want a lot of foot pounds of energy to be carried with that bullet as well.

The Rifle
To really make this new cartridge dance, Savage created a Modern Sporting Rifle with the size of an AR-15. The new cartridge can take advantage of the size and weight savings of an AR-15 sized rifle, where larger caliber bullets to achieve the same terminal ballistics as the .224, require rifles more in the AR-10 weight and size range.

The MSR15 Valkyrie comes with an 18-inch barrel, which provides less range than the 24-inch barrel that Federal Premium bases their data on, but still gives you adequate performance out past 1,000-yards. It uses necked-down 6.8 cartridges and the same magazines, so give it a little while until magazines for 6.8, .224, and .22 Nosler become more common. But given the demand for a better performing AR-15 round, that shouldn’t be too far off.

The MSR15 Valkyrie also comes with an adjustable direct impingement gas system to allow you to tweak your gas flow for reliability with a variety of bullets. It has a fixed stock and a Hogue handgrip with a crisp 2-stage trigger, which is more familiar to AR platform shooters than the Savage AccuTrigger. It comes in a flat dark earth Cerakote finish and looks as amazing as it shoots.

If you get a chance to give the .224 Valkyrie a try, don’t pass it up. Check out the full line of Savage MSR15 rifles and the new .224 Valkyrie ammo from Federal Premium the next time you visit your local Sportsman’s Warehouse.