As my eyes get older, sometimes the front sight focus I have come to take for granted gets a little fuzzier and harder to find. It is no wonder, that so many avid shooters are looking to improve their sighting systems and a great method to accomplish that is with a red dot reflex sight.

I set out to find a decent red dot pistol reflex sight that I could mount without sending off the slide of my gun to be milled. One great option I looked at is the Vortex Viper Red Dot sight.

With a 6 MOA red dot, the Viper is very easy to acquire. Some red dots on the market with smaller aiming points, can be difficult to find in the viewing window, but because it has a larger dot, the Viper is quick to get on target. With the typical ranges that I engage targets with a pistol, the dot is still plenty small so that it doesn’t obscure the target, but that extra bit of mass cuts down on time spent searching for the point of aim.

The rugged single-piece chassis protects the lens and internal electronics from harsh use and accidental drops. Fully multi-coated lenses provide excellent light throughput as well as clarity, while protecting them from scratches and smudges.

Adjustment screws allow 1 MOA per click for quickly setting zero and because the Viper has such a low profile, it can be co-witnessed with suppressor height iron sights for additional fine tuning. 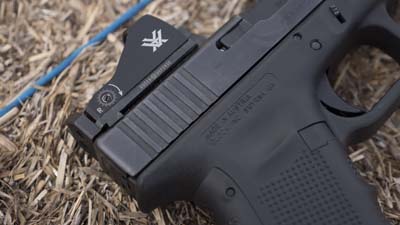 The Viper comes with a Picatinny mount for attaching it to an AR-style rifle, but I was looking to add it to a pistol without the expense and time of sending my slide off to be milled for a red dot. The answer the good folks over at Vortex gave me was that it was available in the form of the Red Dot Backup Mounting System for Multiple Red Dots from Dueck Defense (www.dueckdefense.com).

The RBU mounts to your Glock or M&P pistol can be used by using the existing rear sight dovetail. Just tap out the rear sight and tap in the RBU. The RBU is a snug fit and care has to be taken to tap it in straight to prevent the notch from binding in the dovetail. I found that oiling the slot and using a piece of wood as wide as the mount let me keep it properly aligned, but it still took some heavy blows from a dead blow hammer to get it seated. I used a depth gauge to make sure it was centered. The RBU has a set screw to lock it in place, but as snug as the fit was, I don’t imagine it will be necessary. I believe mounting this would be much easier with a Glock sight pusher tool.

While there are several dovetail mounts on the market for red dots on pistols, the Dueck Defense RBU features a pair of suppressor height sights to co-witness the red dot. The front sight has a tritium vial just below the plane of the sight and the rear notch sights have another tritium vial in the center. The mount is made of steel, so it is far superior to the cheap plastic Glock sights I replaced.

Dueck Defense makes four different mounting plates for the majority of red dots on the market. This was a much better solution than having the slide milled, as I can easily transfer my Viper to another handgun and I haven’t made permanent modifications to my pistol. The $149 price tag was much cheaper than slide milling as well and I had the mount in three days after I ordered it which is much faster than the average turn-around time for milling. Additionally, milling your slide locks you into only using one of the four standard footprints and this way I can easily still use any red dot on the market on my gun without a permanent modification.

A pair of holes drilled in the rear sight allow easy access to the Viper’s locking screws, which prevent the elevation and windage adjustment from drifting from recoil. This allows them to be unlocked and locked without removing the Viper from the mount. 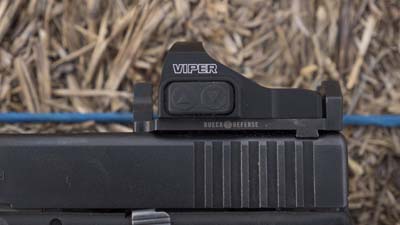 Once I had the Viper mounted, it was a simple matter to get it zeroed. I just picked a fixed distance and co-witnessed the red dot with the RBU mount sights. A few rounds at the range and a little tweaking for a few MOA and I was putting hole on top of hole in no time.

The Viper has a parallax free aiming window, so I was able to rapidly acquire the dot and not worry about it being perfectly centered in the window. It has a long battery life and shuts down after 14-hours of inactivity. A quick press of the rubber buttons on the side and the dot springs back to life at the previously set brightness setting. Two-button operation turns the sight on or off and adjusts the brightness up or down through all 10 of the settings. The advertised battery life of 30,000 hours is only for level 1 use. Average use at level 5 is going to be in the range of 400 hours, which means that it will need to be changed out every 4-5 weeks, if used daily. It takes a simple and widely available 2032 button battery, but the sight does need to be removed from the mount to get to the battery compartment underneath. 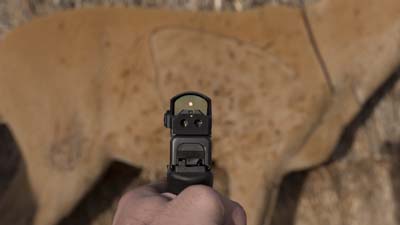 Using the red dot takes a little practice to get used to, but it does demonstrate that most of the time, on presentation, I am slightly pointing the gun at an upward angle. Once I aligned the irons in the window, I was able to pick up the red dot quickly and get on target rapidly. This helped identify an issue that I needed to work on and after a few hundred draws, I was quickly picking up the red dot and had eliminated my tendency to cant the pistol upward. So, in addition to helping me get on target more quickly, the Viper also helped me retrain away a bad habit. It will also force you to achieve a proper grip angle, because if the wrong angle is used, it will be too high or too low in the aiming window to see. You will be amazed at how much your accuracy will improve because the dot forces you to do things the right way and with some practice and diligent effort, you will be getting on target much faster and more consistently than with just iron sights.

The Viper weighs in at 1.1 ounces and the RBU mount is about the same. Since the weight is in direct alignment with the grip axis, it isn’t the least bit noticeable and doesn’t influence bore alignment by causing muzzle rise or dip. All the weight pushes straight down at the grip and you don’t even realize it is there.

All told, between the $229 Viper and the $149 Dueck Defense RBU mount, I was into this for under $400 total and that is a vast savings over permanent modification to my pistol. If your eyes are getting hard of seeing and you would like to gain a bit of a tactical edge, check out the Viper Red Dot Sight at your local Sportsman’s Warehouse optics counter.